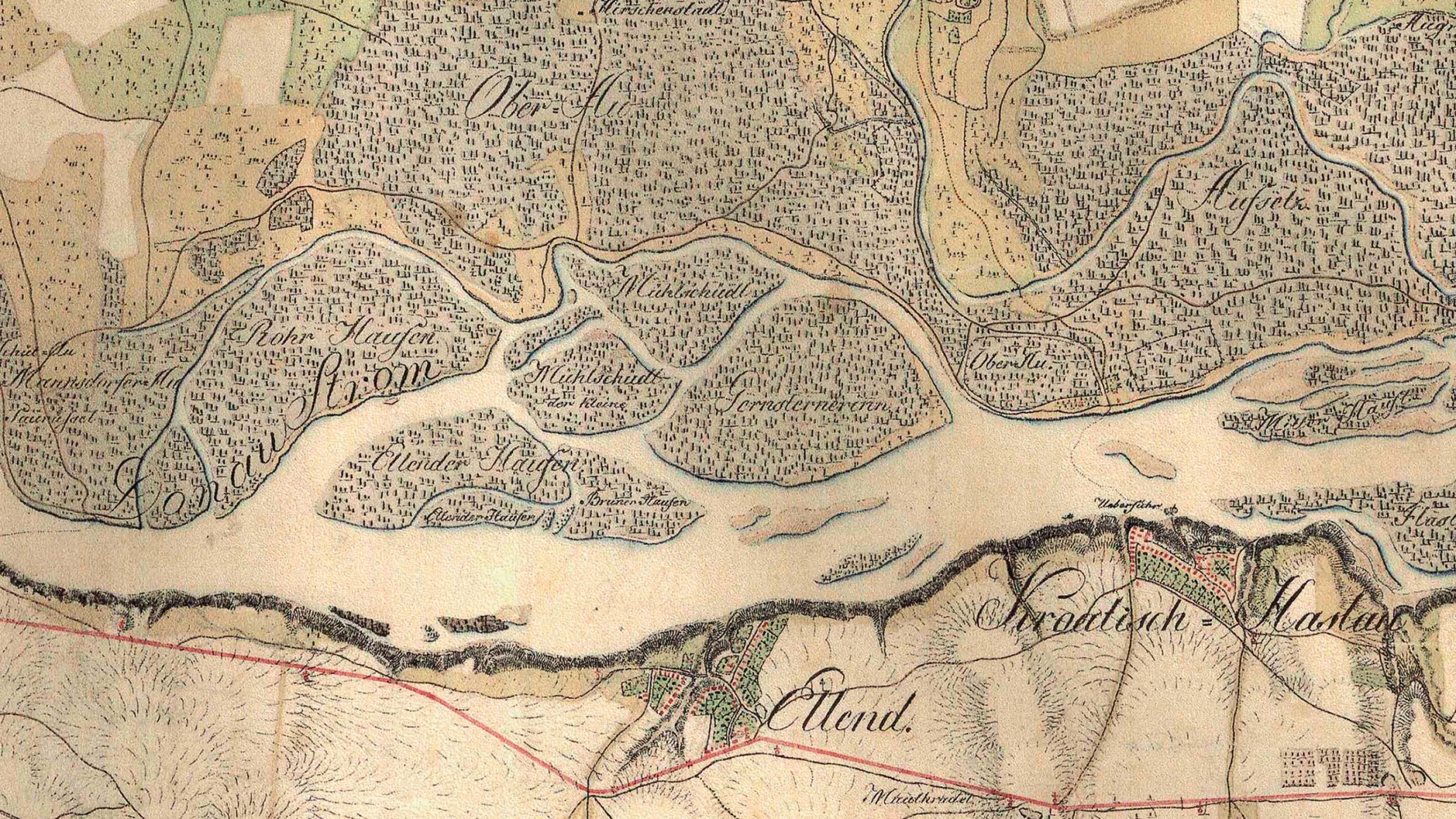 The path to becoming a national park

Up until into the 19th century, the Danube was an untamed river. Then humans drastically altered the ecological balance of this riverine environment through extensive regulation and straightening, all in order to protect the area from flooding and to improve the conditions for navigation. Many side arms were dammed up and ever since, are only replenished when the Danube floods. The Marchfeld protective barrier cut off broad portions of the wetlands from the effects of the Danube. Other massive interventions occurred through intensive forestry operations in broad sections of the riparian woods. In the 1950s, construction of a nearly unbroken chain of hydroelectric power stations along the Austrian Danube commenced. This affected the ecology of the entire riverine system. Next to the Wachau, only one remaining free-flowing river section existed - the section of the Danube east of Vienna.

• 1978 Designation of the Lobau as a nature protection zone (from 1977 Lower Lobau also a UNESCO biosphere reserve, but currently no longer valid)

In 1984, the planned construction of a power plant near Hainburg threatened to destroy the last remaining long section of the free-flowing Danube and its riparian forests. Calls to action by all conservation and environmental groups led to nationwide protests. As the operators of the power plant were to about to begin construction, a peaceful occupation of the wetland forests at Stopfenreuth by thousands of people of all ages and social classes took place - the legendary "Hainburger Wetlands Sit-In". After many unsuccessful attempts by the police in December 1984 to clear the area of protesters, the federal government ordered a cessation of activities in order to reconsider the situation.

Large-scale scientific studies were commissioned and surprising findings were laid bare. For example, there were far more fish species to be found in the Danube than had thought to exist during the planning phases of the power plant. Yet the most important finding of all the studies was that the Danube wetlands in and around Vienna were worthy of national park status. It was then determined that the presence of a power plant could not be reconciled with a national park.

In 1989/90, a large area of the Regelsbrunner wetlands (411 hectares) was obtained during the course of the WWF campaign "Ransom the Environment". In 1990, a contract was drawn up between the Republic of Austria and the federal provinces of Lower Austria and Vienna for the establishment of a national park. From 1991 to 1995, the operating company Marchfeldkanal carried out planning for the national park.

On 27 October 1996, a treaty on the establishment and maintenance of a Donau-Auen National Park was signed by minister of the environment Martin Bartenstein, Vienna mayor Michael Häupl, and Lower Austria provincial governor Erwin Pröll on authority of the Republic of Austria and the federal provinces Vienna and Lower Austria in accordance with Article 15a of the federal constitution. With that, the Donau-Auen National Park had officially been founded.

What has been happening in the forest and open landscape since then? Forestry has long since ceased, and the structural diversity and species composition in the floodplain forest, as well as the proportion of deadwood, show a development back to wilderness. Many rare species of beetles, woodpeckers, owls and bats, which colonize aging trees, as well as over 1,000 species of fungi benefit from this. Some floodplain meadows, which enrich the landscape and biodiversity in the national park, continue to be carefully managed, and the "Heißländen" - unique dry grassland sites - are actively maintained in order to preserve them.

Becalmed sections were created in the area, which many sensitive species accept as their habitat - such as the white-tailed eagle, which had not bred in Austria for a long time. Now, with up to six breeding pairs of the majestic raptor, the national park is a hotspot of the domestic breeding population. Some rare and characteristic species of the river landscape are particularly promoted, such as the European pond turtle. It forms the last reproductive autochthonous population in Austria here. Also many botanical peculiarities can still be found in the Danube floodplains east of Vienna, such as black poplar, water soldier and genuine wild grape.

Great success was achieved in ecological river engineering in cooperation with viadonau. Danube branches that had been cut off the main river by river regulation were reconnected to the Danube, and sections of banks that had been hard-surfaced were made natural. Thus, the character of a dynamic floodplain landscape is not only preserved but also improved. Floods increasingly penetrate the area and continuously reshape it. This creates the habitats that benefit a large number of endangered species, such as wide, unvegetated gravel areas and steep river banks.

A first river restoration project in “Haslau-Regelsbrunn”, initiated by WWF and the national park, was followed by others in “Orth/Donau” and “Schönau”. Across the city of “Hainburg”, almost 3 km of embankments were removed - shortly thereafter, the Danube reclaimed these areas and created a structurally rich, natural river bank. These innovative projects quickly aroused interest throughout Europe. As a result, further river bank areas in the national park were reclaimed and the “Hainburger Johler Arm” was reconnected to the river. Another project has enabled the renaturalization of the “Spittelauer Arm” near “Stopfenreuth”, which now is flooded by the main river for large parts of the year. The next projects are already being planned.

International cooperation and exchange of experience with partner protected areas is an essential focus of national park work. The network DANUBEPARKS, founded on the initiative of the Donau-Auen National Park, includes protected areas from Bavaria to the Danube Delta and continuously implements joint projects in nature conservation and species protection as well as ecotourism. The Alpine-Carpathian River Corridor as a successfully implemented project in the Centrope region Vienna-Bratislava enabled ecological improvements on several Danube tributaries such as “Fischa”, “Schwechat” and other rivers in neighbouring Slovakia with intensive involvement of the local population.

An estimated 2 million people visit the Donau-Auen National Park every year as an attractive recreational area. Many of them come to walk, hike and bike. But there is also great interest in environmental education programs. The schlossORTH National Park Centre, including the Schlossinsel outdoor area, is the first point of contact for visitors, an information facility and a destination for excursions.

Since the establishment of the national park in 1996, this protected area has been preserved and ecologically improved in close cooperation with many organizations, institutions and regional partners. The successes achieved for this precious, unique natural area, its fauna and flora are our incentive to continue on our common path and to further develop the Donau-Auen National Park in accordance with our motto 'Free River. Wild Forest.'