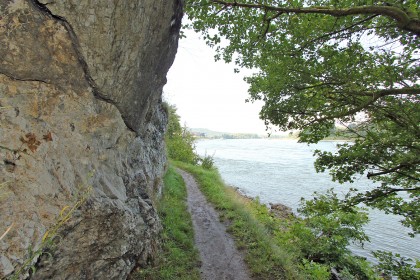 all year round
Hainburg

Hainburg connects very different types of landscape elements in a limited geographic space. The Danube quickens as it passes through the narrows marked by Braunsberg peak and Devin Castle, but afterwards it widens and begins to flow more slowly. The river regulation at the beginning of the 20th century created the so-called Hainburg "Kastln", vernacular for expansive areas of tranquil waters.

The karstic cliffs of the Braunsberg encouraged the development of dry grassland habitats in which many rare flora and fauna species have found shelter. The forests on the slopes of the mountain are markedly drier and differ considerably from typical wetlands vegetation.

On a small scale there are still remnants of old pastures. In former times, many different farmers all used the area for cattle grazing by day, driving the cattle back down the hill to their respective farms every night.

From the Braunsberg plateau there are panoramic views not only of the entire wetlands and the chain of peaks in the Hundsheim range, but also magnificent vistas extending far into Slovakia. 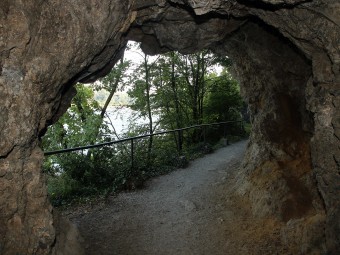 This walk leads through two tunnels carved out of the cliffs on the Danube's banks.
This trail is impassable during times of flooding and high water. For your own safety, please do not walk on closed trails!

Only a few metres from the parking lot, the trail passes one of the most important points along the entire Danube River: through two tunnels carved out of the cliffs, the trail leads along the steep slope of the Braunsberg. When low water levels prevail, the normally submerged cliffs under the river's surface are clearly visible. Deer occasionally roam the rocky hillsides, and ivy tendrils climb the trees and across rocks. The trail veers away from the river banks and follows the Hainburg "Kastln", or tranquil waters. Snowdrop blooms here in the spring, and is followed later by hollowroot.
As the trail ascends, field maples, hawthorn and Bladdernut predominate. The Rötelstein cliffs shelter a very special dry grasslands community made up of flowering Sedum and green lizards. Moving even higher in the slope forest, liverwort and grape hyacinth may be observed. Just before the Braunsbergstrasse, the trail branches off to the right, returning back along the slope as a narrow path. Before the descent back to the Danube, there are more stunning panoramic views of the wetlands and the city of Hainburg. 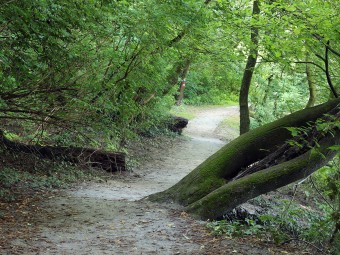 The trail passes by several old common pastures.
Only portions of this trail are accessible in times of flood or high waters!

The trail first runs along the Danube and the Hainburg "Kastln", or tranquil waters. In the spring, hundreds of frogs and toads meet to mate, and shortly thereafter the waters are brimming with countless tadpoles. After the Rötelstein cliffs the trail leads back down towards the wetlands, accompanied by the pungent aroma of wild garlic in the spring. On the right is a backwater which is dry except for in the springtime. This aridity is also seen in the tree species found here, fluttering elm and field maples. The forest becomes thinner and the trail leads to a large expanse of meadow, one of the old Hainburg common pastures.
After passing a small stand of ash and field maples, the trail leaves the Donau-Auen National Park, crossing the Hainburg golf course (which was created on an old pasture in the 1960s), eventually joining the Thebener Strasse. The last portion of the trail runs through vineyards, then finally across the rocky cliffs east of the Hainburg Bergbad swimming pool and then back to the Danube. 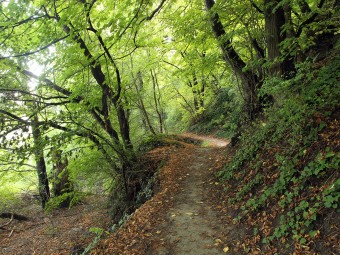 Most of the trail is in the Braunsberg conservation area.
This trail lies outside the actual Donau-Auen National Park

Starting at the parking lot, the trail leads over karst-like cliffs to the Danube Circular Trail above. The narrow path meanders through compact areas of dry grassland where irises bloom in the spring, then through a light forest of Ailanthus, Bladdernut and hawthorn. After crossing the Braunsbergstrasse, the path ascends through a stand of locust trees. Evidence of the presence of game is seen by the numerous raised deer stands, feeding troughs and other hunting-related equipment to be seen along the way.
Magnificent 360-degree views reward walkers after reaching the wide peak of the Braunsberg. In the spring this ancient Celtic entrenchment is particularly beautiful, with many botanical rarities such as the grass species Stipa, and the flowering Dianthus. In late summer, observant walkers may glimpse a praying mantis or a ladybird spider.
After leaving the Braunsberg plateau in an easterly direction, the trail leads to a loose stand of field acorns and Downy Oaks. Then it arrives at the vineyards at the foot of the Braunsberg, proceeds in the direction of the Hainburg Bergbad swimming pool, across the cliffs, and back down to the Danube. 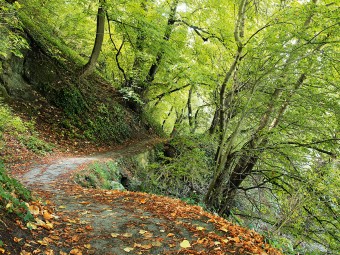 Most of the trail is in the Braunsberg conservation area.
This trail lies outside the actual Donau-Auen National Park.

After ascending across the karst-like rocks to the Danube Circular Trail above, walkers are rewarded by excellent views of the wetlands. There are carpets of Snowdrop and hollowroot lining the trail in the spring, which ascends to the first broad meadow with a beautiful view towards the east, to Slovakia. The trail again crosses the Braunsbergstrasse, following the edge of the forest at first, then turning into the dense slope forest on a narrow path. Deep trenches and gullies formed by shifting stone and soil cut across the path frequently, and there are numerous signs of wild animal crossings.
As the forest begins to thin, pine trees join the oaks and acorns, and the path winds around the south side of the Braunsberg. The path becomes very stony and even narrower, and is lined by buckthorn, privet and hawthorn. In the winter, numerous songbirds feast on the berries. The path makes a slight westward turn, returning to the trailhead and a last panoramic view to the Danube.