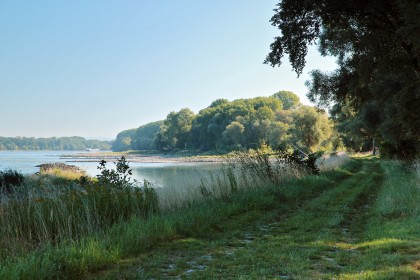 all year round
Maria Ellend-Haslau-Regelsbrunn

Maria Ellend
The villages on the south banks of the Danube are elevated and thus enjoy a certain degree of natural flood protection. Consisting mainly of gravel, the slopes may be set in motion by heavy rainfall, the effects of which may be clearly seen along the walking trails. Here and there in the slope forest the Common Beach may be found; this is somewhat unusual given the relatively low altitude.
Along the Danube, numerous traditional fishing huts with their typical square fishing nets attached to flexible poles can be seen. But only licensed hobby fishermen will be pulling nase and Barbel from these waters, as commercial Austrian fisheries disappeared from the Danube in the 1950s.
This stretch of the river is free from ice in the winter, and is thus a popular over-wintering site for ducks from Northern Europe. From November to February, the pochard, Common Goldeneye duck and cormorant may be observed diving for food and sitting with spread wings in order to dry their feathers.

Haslau
Before the Donau-Auen National Park was even founded, Haslau was the site the region's first water connectivity project. The lowering of the towpath ("Treppelweg") and the concrete box culvert would today seem like minor attempts to supply the wetlands with more water, yet in flood conditions, these sections are transformed by roaring currents. Under such circumstances, crossing is perilous. The so-called Mitterhaufen, a core zone within the National Park, has been significantly transformed by these measures, thus fulfilling the original aims of the project.
Shallow gravel banks run along the Danube directly adjacent to the Haslau Traverse, and during periods with low water levels, it is possible to wade out almost to the middle of the river. This section of the river may be used as a natural swimming area. Animal tracks may be observed in the fine river sand. The waves of fast-moving boats and ships propel many river organisms far over the beaches to the areas around the willows; many small creatures find it impossible to return back to the aquatic environment they need in order to survive. 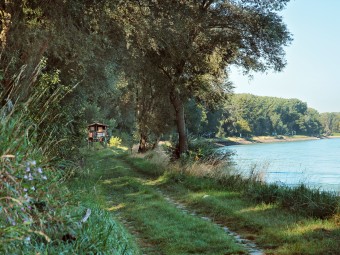 Short trail section along the Danube.
This trail is closed during and after periods of flooding.

The trail starts as a narrow path along a steep slope. Even in early summer, the trail leads through dense thickets of Stinging Nettle, impatiens and dewberry; in August the delicious berries are the walker's treat! The trail runs along a backwater where beaver feed and kingfishers flutter. At the traverse leading east, the backwater becomes wider. Herons, swans and in the winter, ducks, populate these waters. Shortly before the trail reaches the Danube, it crosses a trench which is almost always filled with water, and where deer and martens have left their tracks.
The trail continues on the towpath ("Treppelweg") along the Danube. In the winter it is usually very windy, but the site is excellent for bird watching. Waterfowl prefer the banks on the other side of the river. The White-tailed Eagle may be spotted flying high above.
The path turns off from the immediate shores and continues on soft Danube sand until reaching the Haslau Traverse. 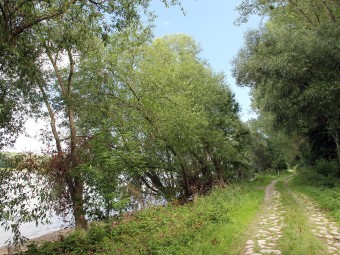 Section of trail along the Danube.
This trail is closed during and after periods of flooding.

The Danube is reached across the Haslau Traverse. Downstream is a depression in the towpath ("Treppelweg"), then a bridge opening. This side arm was reconnected to the Danube in order to supply water to the wetlands in certain parts of the year. Shortly afterwards, the trail passes the landing for the passenger ferry to Orth.
Low willowy shrubs thrive on the shores which later flatten out into gravel banks. In order to protect the nesting grounds of birds such as the Little Ringed Plover – which build their nests in loose gravel banks – these areas should not be disturbed in any way.
After approx. two kilometres, the trail passes the "1900 km" mark on the river, which measures the distance from the mouth of the Danube at Sulina, Romania. It continues along an old grove of poplars, and the woods become increasingly thick and mature. A side arm populated by grey herons, great white egrets, cormorants, swans and goosanders is crossed once more at the Regelsbrunn Traverse.