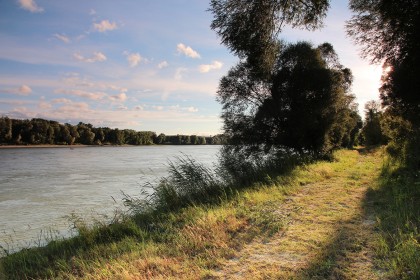 all year round
Schönau

The narrow strip of wetlands forest in Schönau is one of the most dynamic areas of the National Park. The Danube can flow into its branches by way of two depressions along the towpath ("Treppelweg"), shifting substantial amounts of gravel along the way. The new banks and islands that are continually created in this way are home to a variety of bird species which nest on gravel surfaces, such as the Little Ringed Plover and the Common Sandpiper.

The native kingfisher also prefers the sandy-loamy river banks of this dynamic habitat for nesting. In fact, in the winter there are numerous bird species searching for food in the ice-free waters.

The best opportunity to glimpse beavers building their lodges into these steep embankments is on late winter afternoons. Following high-water periods, the replenished ponds become the ideal habitat for frogs and toads which utilise such bodies of water in the spring as spawning grounds.

When water levels are low, many traces of fauna may be observed on the exposed, sandy banks. 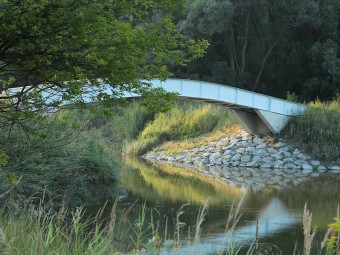 Short circular trail through one of the most dynamic areas of the National Park.
This trail is impassable during times of flooding and high water. For your own safety, please do not walk on closed trails!

Starting point:
Parking lot at the end of Schönau/Danube, next to the "Radler Treff" snack stand. After crossing the Schönau backwater, the trail continues in a long S-bend until it reaches the National Park entrance, which is marked by two wooden piles.

From the outer Schönau Traverse one has an impressive view across the reedy expanse of the Kühwörther Wasser, where herons may often be seen.
After crossing the levee, the landscape is dominated by the White Willow, and there are small ponds populated by aquatic insects, snails and freshwater mussels. As the months progress from spring to summer, the thickets of nettles, dewberries and impatiens lining the narrow trail grow metres high. Fresh beaver marks on the low-lying willows may be observed along the way. Just before reaching the Danube, there is a bridge spanning a reconnected river branch. Even when the waters are not particularly high, there may be strong currents here. Newly-created river banks are often home to nesting kingfishers.
The trail continues several hundred metres downstream along the Danube, turning towards land at the next traverse. During the winter, numerous bird species may be observed here, such as cormorants sleeping in their eyries, or even the White-tailed Eagle. The trail returns through a stretch of riparian forest to the levee.