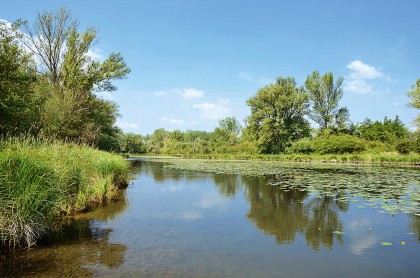 all year round
Lobau

The Viennese section of the Donau-Auen National Park is an area through which the Danube formerly flowed. After river regulation commenced at the end of the 19th century, however, it was all but cut off from surface water inflow. Yet there are still traces of where these bodies of water once were. Even local place names such as "Häufl" (vernacular for alluvial island) and the damp basins in the landscape are indicators for where islands and river branches used to be found.

In the spots where gravel could no longer be carried away by the current, so-called xeric habitats evolved. With thorny vegetation and diverse animal species which thrive in dry habitats, such extremely dry environments are reminiscent of African savannahs.

There is considerable alluvial build-up in the backwaters of the Lobau, but such places form the ideal habitat for certain bird species. Though they can be clearly heard, such birds are nearly invisible when swimming or moving about the reeds.

Discovering the wonders of the Lobau requires patience and careful observation in order to glimpse its many hidden inhabitants. 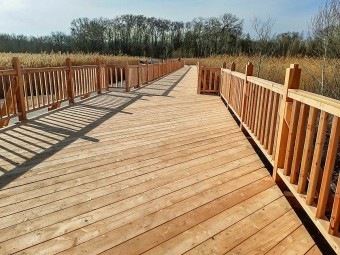 This route takes you across xeric habitats and along tranquil backwaters.

The trail begins at the wien-lobAU National Park House, leading first to the so-called Dechantlacke, a popular old natural swimming area. Beavers have left gnaw marks in the vicinity of these deserted gravel pits, and turtles may be spotted in tranquil waters from April until far into the autumn months. Unfortunately, there are also many non-native species – especially yellow-bellied and red-eared sliders set free in the wild by their human owners – which threaten the native and very rare European Pond Turtle.
The trail crosses a short stretch of xeric habitat which is covered in magnificent orchids in the spring, then continues on to the Josefsteg boardwalk spanning a backwater now overgrown with reeds. Sharp observers may spot the European Pond Turtle here, too, as well as giant carp. The trail then proceeds past meadows and along a stretch lined by chestnut trees until the Lobau Grundwasserwerk water works facility is reached, and from there across the fields to the Saltenstrasse entrance to the National Park.
At the edge of the forest is an observatory platform on the body of water known as "Tischwasser" where you may spot waterfowl. Return to the Josefsteg boardwalk across a stretch of dry habitat and from there back to the wien-lobAU National Park House. 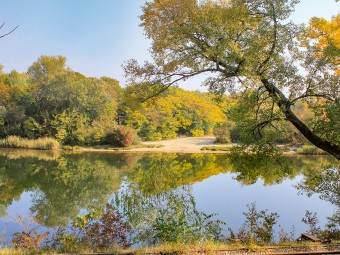 Walk along numerous scenic tree-lined paths and across the broad meadows of the Lobau.

Right after the parking area, the trail passes by a World War II bunker, then proceeds across a stretch of xeric habitat populated by numerous Sea Buckthorn and hawthorn bushes, eventually arriving at the natural swimming area at the Panozzalacke backwater. Swans may often be observed here. The trail continues under a canopy of ash trees along the Fasangarten Arm, a side arm now much overgrown with vegetation. In this area, deadwood provides the ideal habitat for any number of woodpecker species.
Lined by chestnut trees, the trail proceeds past the Grundwasserwerk water works facility, following the Vorwerkstrasse, through allées lined with oak and old fruit trees, across expansive meadows and fallow fields. A platform is a good spot to look out across the tranquil backwaters, where moorhens may occasionally be seen.
The path then breaks off towards the south, proceeding through a quiet meadow area where deer and rabbits may romp in the autumn. Immediately before reaching the Panozzalacke, the trail passes a large roosting place where rooks spend the long winter nights. 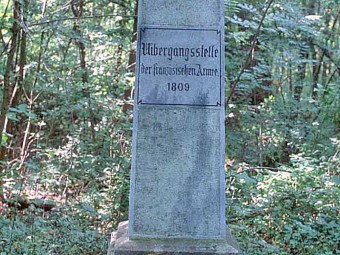 From the Uferhaus in Gross-Enzersdorf, the trail first leads across former islands which can still be recognized as such thanks to the entrenchments which are still visible. The expansive ash forests are now quite arid. From the Kasernbrückerl bridge the trail turns southwards, passing Napoleon's powder magazine, then the French cemetery, both hidden by thick riparian woods. The trail then leads past the forester's lodge at the barbican, then meanders through expansive meadows. Be on the lookout for deer, rabbits and even raptors on the hunt during winter months.
Continue along the Napoleonstrasse to the southernmost boundary of the Lobau. Near the Panozzalacke and the large fuel depot, there are two additional Napoleonic monuments before the path reaches the composting facility and again joins up with the circular trail. This section of the trail is quite isolated, running along expansive meadows, fallow fields, densely-wooded areas and small bodies of water on the way back to Gross-Enzersdorf. 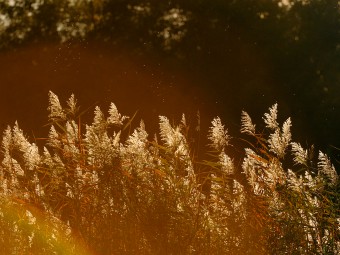 An idyllic walk in the Lower Lobau lasting several hours.

Starting at the parking lot at the Uferhaus in Gross-Enzersdorf, the route first runs south to the Danube-Oder canal and the natural swimming area found there. The grounds surrounding this man-made body of water are extremely arid, and the barren ground is populated by Sea Buckthorn and locust trees. After reaching the levee ("Marchfelddamm"), this very windy section of the trail follows the crest of the dam in an easterly direction. From November to February, many ducks and other waterfowl species over-winter on this ice-free section of the Danube.
After the dam, the trail curves to the north, crossing a nearly overgrown backwater at the so-called Kreuzgrund Traverse. Herons and moorhens may sometimes be observed on these tranquil waters. Trees on the banks exhibit the typical gnaw marks left by beavers, and occasionally a muskrat may be seen swimming in the waters. The trail finally turns back towards the west, running along a tree-lined route, then later along meadows and fallow fields until it returns to the trailhead.