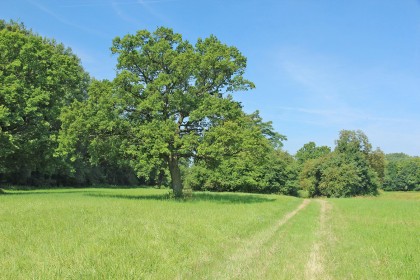 Even today, the historic marks left by avid Habsburg hunters can be explored in the riparian forests around Eckartsau. The expansive meadows surrounding Eckartsau Castle were in fact designed for the hunt. Powerful elk still populate these woods and visit the meadows during the rutting season.

The so-called "Rote Wird" near the Danube is named for an island. The vernacular "Wird", or "Wörth" is an old name for island; and the German "Rote" refers to the German "roden", or clear-cutting. Thus a "Rote Wird" is an island from which all trees have been removed. The traces of the watercourses that used to flow across these grounds can still be seen today.

Here, the backwaters are not connected to the Danube, but instead are replenished by groundwater, or less frequently, backflow from the Danube. Beds of reeds now grow here, and in turn offer valuable nesting opportunities for diverse waterfowl. The Nuphar, but also rare species such as Arrowhead, cowbane and Butomus, thrive in these placid waters.

The riparian forest in Eckartsau exhibits an entirely different character from the ones experienced in the more dynamic areas of Schönau and Orth. 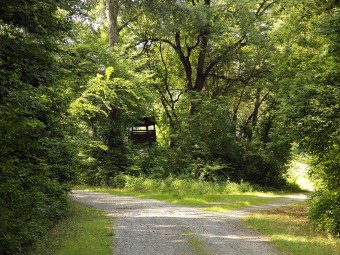 Only a few metres past the Castle, a stone bridge crosses the Fadenbach Creek, a former river branch with banks overgrown with reeds in which moorhens often hide. Occasionally a muskrat may swim past, or grebes may be spotted looking for food. The trail then follows a broad forestry road until reaching the levee ("Marchfelddamm"). From the crest of the dam, another oxbow lake stretches northwards, and turtles and grey herons may often be spotted here.
Adjacent are pastures in which calves may graze in the warm months, serving as natural mowers to keep the grounds from becoming too overgrown. Here one may even glimpse the Hoopoe, with its colourful and distinctive crown of feathers. Looking towards the south from the dam there is a large expanse of meadow in which wild boar often scavenge for food. Returning to the trailhead, the trail passes another meadow and a fork of the Fadenbach Creek. The last body of water passed on the trail is the old Eckartsau Baths, one of the safe havens for the rare Mudminnow. 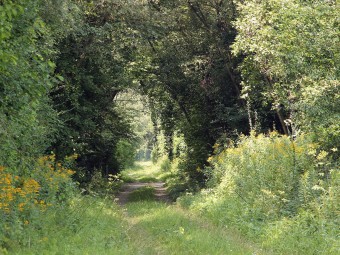 A walk with many highlights through the former imperial hunting grounds.
This trail is impassable during times of flooding and high water. For your own safety, please do not walk on closed trails!

The trail exits the Eckartsau Schlosspark to the south. The levee ("Marchfelddamm") is reached by way of the broad tree-lined Maria Theresia allée. Right after this is a spot where deer tend to linger; they may be heard or even seen by especially quiet walkers.
In one of the first large meadow expanses, a noticeable drop-off marks where a Danube side arm once flowed. Many different insect species swarm around the stately oaks. Before branching off to the right, the trail crosses a backwater where one might see the European Pond Turtle sunning itself. The trail continues through a narrow strip of forest before reaching the towpath ("Treppelweg") at the Danube. The grounds open up to the so-called "Roten Wird", an expansive meadow landscape which is traversed by old watercourses.
The trail bends sharply towards the north, still proceeding through meadows and later through a cool riparian forest. It leads again across the dam and – after a large pasture – joins the circular trail at the Eckartsau Schlosspark.